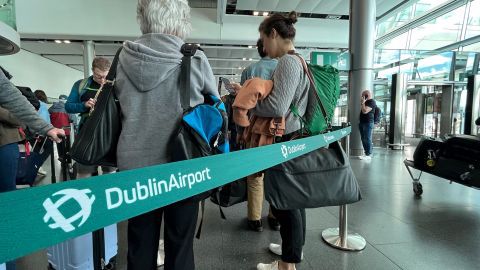 A Cabinet sub-committee met yesterday, October 24, to deal with the crisis after it emerged that more than 40 refugees were sleeping in Dublin Airport after being told there was no room for them elsewhere.

The Office for Children, Equality, Disability, Inclusion and Youth Affairs said the total was 43 men. Ambassador of Ukraine to Ireland Larisa Gerasko took this with disappointment. She said that as far as she knew the government was “working on a plan” but that the situation was “unacceptable” and that perhaps it would be better to announce the lack of accommodation in advance before people bought tickets and came here.

The government aims to take a number of measures to strengthen Ireland’s ability to provide Ukrainians with housing. For example, the government plans to double the €400 payment to people who host Ukrainian families to encourage more people to join the scheme. And yesterday, on October 24, a new temporary point was opened at the airport to house those who were left without a home.

Vacant properties and holiday homes will be used, and efforts will be made to encourage refugees to leave hotels. Now the state pays for every fourth hotel room across the country.
Currently, the state accommodates more than 58,000 people (42,000 Ukrainians, and 16,000 citizens of international protection). This figure compares with 7,250 at this time last year.
Foreign Secretary Simon Coveney said two months ago about 750 Ukrainian refugees were arriving in Ireland a week, but that number had quickly risen to about 1,500 a week, along with 400 people from other countries seeking international protection.

Speaking on Morning Ireland, Emma Lane Spollen of the Ukrainian Civil Society Forum said there was some disappointment that the government had not planned to deal with the issue despite being warned of large numbers of refugees arriving. “I think that’s why there’s some frustration that some of the decisions that should have been made about investment decisions weren’t made six months ago. The predicted numbers were 100,000 and 200,000,” Spollen said.

A government statement released late yesterday said: “Ireland has never seen so many people arrive in such a short space of time and tens of thousands are receiving assistance.

“More than 54 thousand arrived in Ireland from Ukraine, seeking protection as a result of the war. This is equal to almost 1.2% of our population, which is very favourable compared to other European countries and demonstrates our solidarity with Ukraine and the rest of Europe in overcoming the crisis.

The government said it was very conscious of its international obligations, but due to the significant increase in asylum seekers here, “we need to speak openly about the current challenges to those who may be planning to travel to Ireland in the coming months”.

In a bid to speed up the number of places available for refugees, the government has said it is to launch a new tender for vacant properties and holiday homes.

The government said that more detailed information about the plans will be published in the coming days.