This week, a master class of the talented Ukrainian decorative artist Yulia Shapoval was held for Ukrainian children in Wicklow.

Ukrainians painted pumpkins with Petrykyvka (Ukrainian decorative and ornamental folk painting, which was formed in the Dnipropetrovsk region in the village of Petrykyvka). And they also worked with clay, where they practiced sculpting and colouring candlesticks.

Yulia Shapoval taught art in Ukraine, but with the beginning of the war, a decision was made to move to a safer place. In addition, her husband already lived in Ireland. Therefore, there was no question of choosing a country. In Cavan, where the craftswoman settled, there is a Ukrainian community of up to 1,500. “The children, who were under such great stress and were forced to move from their native homes in one moment, needed to be occupied with something positive,” – says Yulia. – That’s why I started doing what I do best, teaching drawing. It is also a good practice for relaxation and calming. It is also useful for our children.”

It turned out that the demand for extracurricular clubs for Ukrainian children has become quite high. And quickly there were constantly active groups of 20-30 people with art classes for young children and teenagers.

“Later, we realized that we should also help children from the outskirts of Cavan, so we started organizing away master classes,” continues Yulia, “yes, with the help of the Association of Ukrainians in the Republic of Ireland (AURI) and Cavan County Local Development, we organized the rental of premises and transport to local communities, where sometimes 70-75 children gathered.”

Yulia got to Wicklow at the invitation of Tetyana Antonova, the manager of the local Ukrainian hubs “Palyanytsia”. The organization County Wicklow Partnership, which repeatedly helps Ukrainian communities, sponsored the work of the artist and helped to promptly purchase the necessary materials. In this way, more than 15 children had the opportunity to have fun and do bright things that people will remember fondly.

“My grandmother’s birthday in Ukraine is coming soon,” says 11-year-old Alisa, – “I miss her very much and made this candlestick with her in mind maybe I can send it to her by mail, and it will arrive on time. I hope she likes it a lot!”

The Association of Ukrainians in the Republic of Ireland (AURI) is trying to help the Ukrainian diaspora adapt to the new conditions that have so suddenly burst into the lives of many Ukrainians. AURI is currently working on a project to create a Ukrainian development centre based on “Palyanytsi”.

The first of them is likely to be the so-called Saturday school “Sonechko in Cavan”. And later in other districts.

But already now, if you want to organize a similar meeting with the Ukrainian artist Yulia Shapoval in your Ukrainian community – send applications to [email protected] AURI will try to help you in organizing art classes and other development activities in your community. 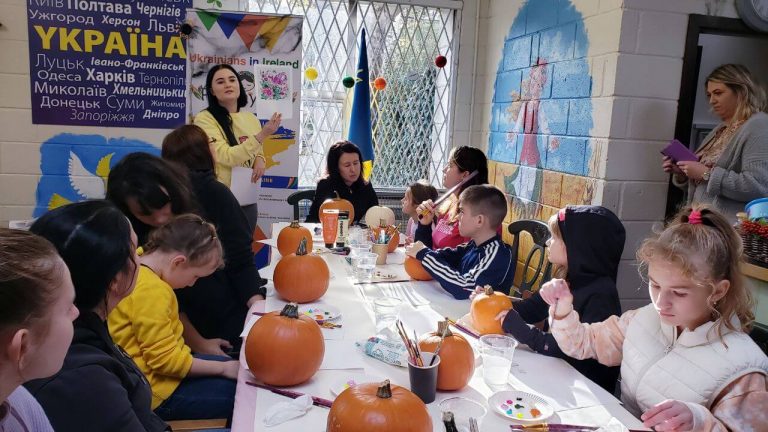