Almost 40,000: where are the Ukrainians in Ireland allocated? 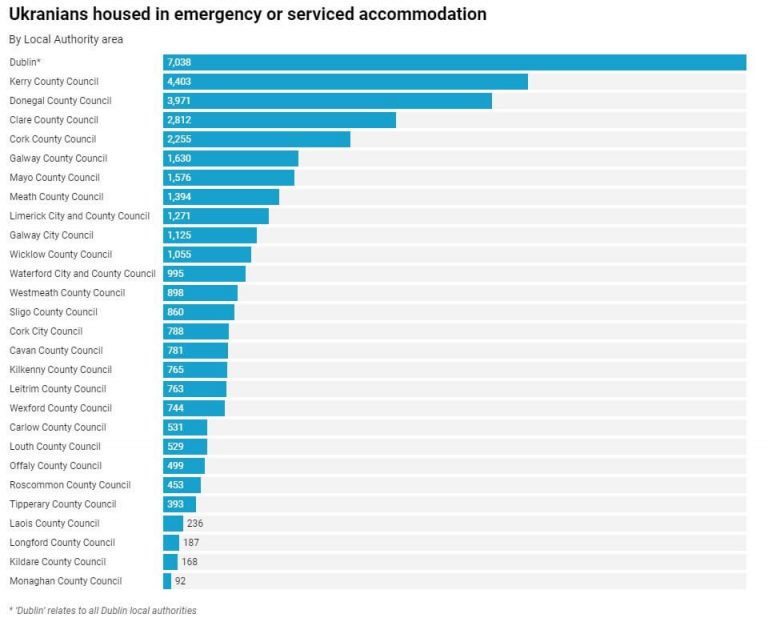 A county-by-county breakdown shows that Dublin is housing the largest number, with 7,038 in hotels or other forms of serviced or emergency accommodation. The “holiday” counties of Donegal and Kerry are next, with 3,971 and 4,403 accommodated in each county respectively.

A total of 15,412 people are accommodated in just these three counties – some 40 per cent of the total.

By contrast, some counties are housing very few Ukrainians. Between them, the five counties with the lowest figures – Monaghan, Kildare, Longford, Laois and Tipperary – are housing just more than a thousand, or just 2.8 per cent of the total.

The figures exclude those in pledged accommodation, where more than 4,000 people have been housed. The State’s systems for receiving both those fleeing Ukraine and those arriving seeking international protection are under extreme pressure.

According to www.thejournal.ie, сivil society groups and politicians are calling for increased checks and balances on the systems for housing Ukrainians who have fled the war, with the conflict now dragging on into winter and showing no signs of abating.

Emma Lane-Spollen, national co-ordinator of Ukraine Civil Society Forum, said there was “no medium-term planning” over how to accommodate refugees from Ukraine, and little oversight of many of the accommodation options being contracted by the State.

While many providers of accommodation were stepping in to help with welfare issues or other problems experienced by Ukrainians, Ms Spollen said the department does not have any choice over who to contract with given the pressure associated with numbers coming in.

“They’re kind of taking anything and they do not have the oversight to ensure welfare, bottom line,” she said. “There isn’t a policy except we need to find shelter and we’re chasing whatever accommodation we can find, and apart from Dublin, it is in counties with considerable seasonal tourist business.”

Joe McHugh, the Donegal TD and former Cabinet minister, said he wanted to know how properties and locations were chosen and “how the department decides what is an appropriate number of people per property to ensure the safety and welfare of those being accommodated”.

He also said communication was vital with education and health providers to ensure people being accommodated had access to important services.